The silence of Ani

This video is in black and white.

The setting looks deserted and wild, spacious, grasses wave in the wind. There are fragments of masonry, something like a chapel, columns, carved words, an ancient site with no visitors, or only a few young people with bird whistles, making sweet trilling noises of various kinds, approaching and coinciding, falling into a rhythm and then silence as they are seen lying down.
Were they remembering some destruction? Were they reenacting deaths?
After a pause we see a drawing of the once large city of Ani. We read that this was a performance to imagine the place with birdsong revived, before a long past destruction. The bird whistle blowers were asked to perform until tired, when they lay down.
I was reminded of visits I have made to ancient sites, aware of lost long dead people. I was enjoying the way the filming was done, the swaying of grass, some blurred shots, the mingling of various trilling sounds, the movement before stillness.
My companion would have liked the explanatory titles at the beginning but I liked being aware of my reactions before the information came up. I had been expecting more current conflicts to be referenced but instead the message seemed to be a universal one of time passing, civilisations falling, cities ruined but treasured, an idea of people everywhere as fragile, as possessing a common humanity.

Ani in winter appears to be even more beautiful than in summer.

Both Ani and The Square are the best films I have seen in a long time. Without these two reviews I would have never discovered them and hope the New Art Examiner will cover other thought provoking films such as these in the future.

Another outstanding short film is The Last Farm, set in Iceland.

Ani in black and white is desolate. Here it is in color, and it is so beautiful to make one stop and wonder how anyone could abandon such immense beauty. I suppose it is the reason they built so many churches here, not 1,001, but it seems 41. 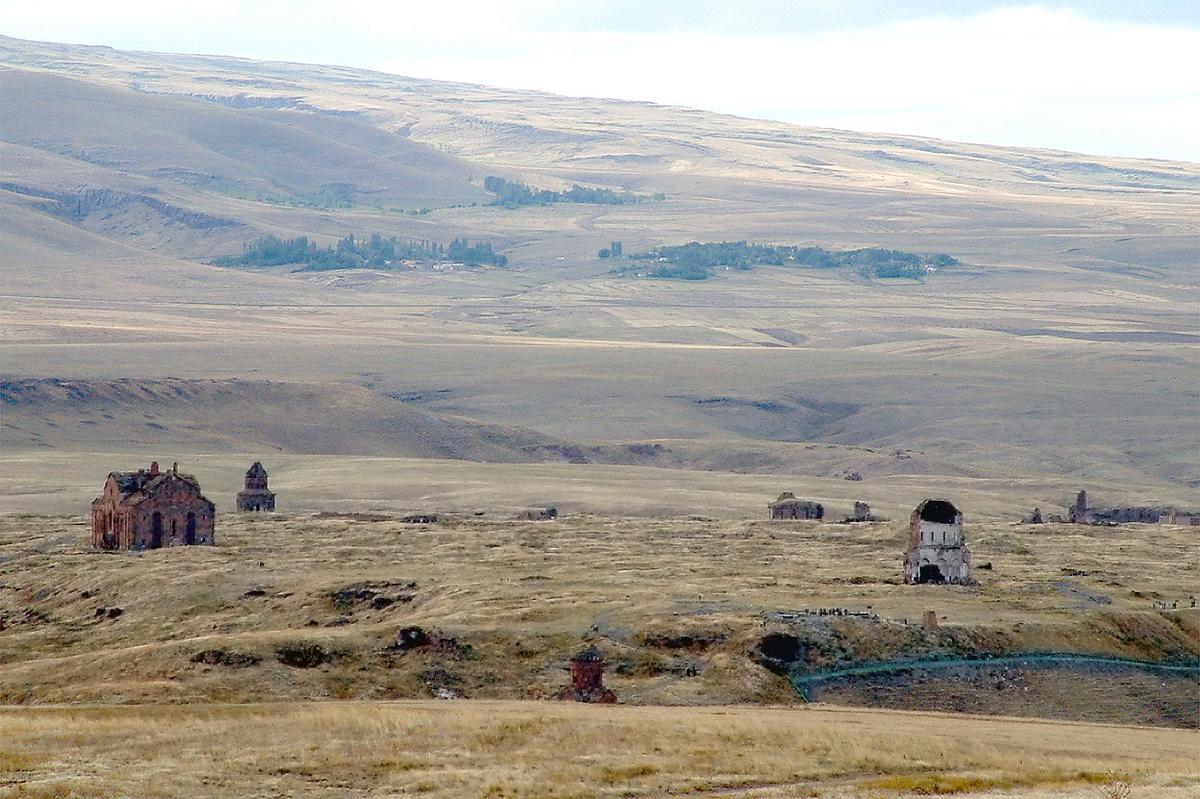 Looking at this photo after watching the short video on Ani in black and white makes me ask how it would have been in color. The absence of color created a very severe and harsh atmosphere, while the video in color would have given it a more dreamlike atmosphere with another kind of definition. It would be fantastic if one could watch this same video in black and white and also in color to see the different effects. Personally, I really felt the absence of color in the video.

Why doesn’t anyone talk about the man behind this film? It’s like talking about a painting without giving any importance to who did the painting. By the way, Francis Alÿs isn’t just a filmmaker, he’s also an artist, as can be seen in the great artistry displayed in The Silence of Ani. His artwork showed at the Tate a few years ago: https://www.tate.org.uk/art/artists/francis-alys-4427

I really liked Alys’ film with the bearskin wearing soldiers marching around London.

A must watch is Francis Alys’ Reel-Unreel filmed in Kabul:
http://francisalys.com/reel-unreel/

The Silence of Ani was well worth watching. It was deeply disturbing how an apparently thriving city could disappear into nothingness, and the fact that the film was in black and white intensified this feeling.

There were between 100,000 – 200,000 inhabitants in Ani in its prime. How could the total abandon of its population happen without comment from the rest of the world? What about the immense loss of this cultural patrimony? It’s thanks to Francis Alÿs that we know something through his film, The Silence of Ani.

As a cartographer, I found the map of Ani extraordinary. I need to know more about it. I was just getting ready to do something else because I was fed up with the bird whistles, when the map appeared on my screen. I would love a reprint of it.

Watching this video, thanks also to Deidre who sent in the link, I found it extraordinary. I knew absolutely nothing about Ani and its 1,001 churches, which is an astonishing number of churches in such a small area, or any city for that matter. It must have meant that Ani had a very powerful energy with so much prayer present. I’ve been reading about Ani and found that its buildings were some of the most artistic structures in the world. I was left in awe and can only imagine what it may have been like before it was destroyed and… Read more »

Recently there was the Poetry of Stones, Ani exhibition at the Depo Gallery in Karaköy in Turkey. “The exhibition is dedicated to the restoration work that has been done on the site, starting from the Russian archaeologists to today’s collaboration of Turkish architects and Armenian stonemasons. There are, naturally, photographs, quite big ones too, and a stroll in the two stories of the Depo building in Karaköy gives one a sense of having glimpsed the grandeur that is Ani. The exhibition, of course, remains a “lifeless imagination” as Turks like to call the medium of the photograph, but an imagination… Read more »