‘Hummadruz’ refers to a humming sound heard by some visitors to ancient sites such as reported by Andy Norfolk in the periodical Meyli Mamvro as he and two friends experienced it at Zennor quoit, not far from Newlyn Gallery.
My companion reacted to this by saying, ‘sometimes you get a noise from the wind blowing through the long grass – it’s a physical phenomenon – not some mystical crap.’
As the title is a Cornish word new to me I found I was calling the show ‘that stuff about the occult and magic’ rather than the gallery leaflet’s ‘lived system embodied by both artists and communities’.
Unusually it was the video exhibits I found the most interesting. There is a circular tour round an Irish hill plus a black mark on the lens that the artist, Niamh O’Malley, thought necessary. There’s a beautifully filmed bright sequence of a Danish woman asserting her belief in the strengthening properties of a Rowan tree, by Gitte Villesen. And there is a small child listening to remarks about the supernatural, as he colours in and asks matter of fact questions. This last, by Susan MacWilliams has a warning in case parents do not want their children to be hearing the conversation.
In the 70s Monica Sjoo’s works about the occult and the Bronze Age stone circles were complained about in St.Ives and removed by police. The curators have the account of this in the Daily Telegraph to entertain us, but now no such fuss has been made as her paintings are shown here.
The American Mary Beth Edelson’s use of nude photos plus pagan allusions from the same time are also here. Both recall an era when feminism had quite a yearning for times before patriarchal religions took control, and a fascination with the idea of an essential ‘femininity’, which claimed certain qualities for women’s work. Some appreciative visitors’ comments indicated this may persist.
There are artifacts displayed from the Cornish museum of witchcraft.
There is rather a lot of small print to read, stuck not always quite straight on the wall and not as I would have liked available to read as a handout, sitting down to take it in comfortably.
Linda Stupart has spells to take away, one of them against the malign effects of Richard Serra’s work and fame, a sign of men’s dominance in the art world as macho wielders and welders of big heavy objects.
So, there is humour, history and the batty edge of art, from Ithell Colquhoun’s surreal vision of a stone circle to an artist new to St.Just, Lucy Stein, who says, ‘Since settling permanently in St.Just I have become totally cosmic’. (2016)
Does this show provide an interesting change from the usual arts council fare? Another show all by women but not saying it is so as not to provoke complaint? Is it a worrying rejection of science and reason in suggesting the ancient supernatural beliefs are live and flourishing? Is it adding to a Cornish touristy myth of a backward strangeness with romantic aura? Is it a themed show with art you probably haven’t seen much of before? An examination of a tiny backwater?
It’s all of that.
The slides weren’t working, the tea was not being served and my camera batteries ran out.
A jinx on this sceptical visitor or just bad luck this bank holiday Monday?
Mary Fletcher
www.axisweb.org/p/maryfletcher

I believe this is Ithell Colquhoun’s stone circle the author refers to in her article. 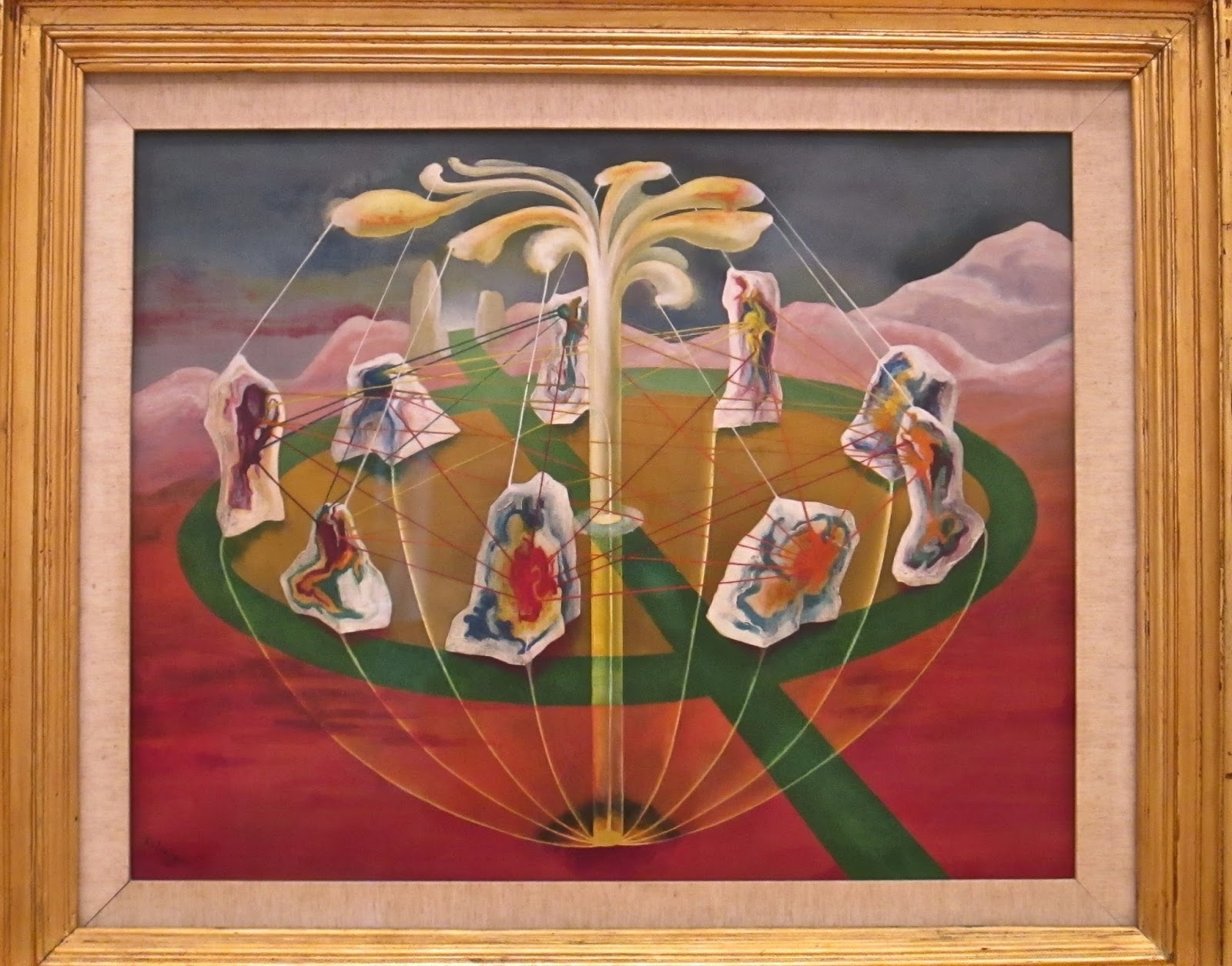 Thank you for posting the image.

Hi Mary,
This was quite an intriguing and fascinating review of one of the strangest “art” exhibitions I have ever heard of. Reading it made me really want to know more about Cornwall and its mysteries. I wonder if this exhibition will go to other places, as it sounds quite unique. Do you know if there is any connection between the witchcraft of Cornwall and the witchcraft of Salem, Massachusetts?