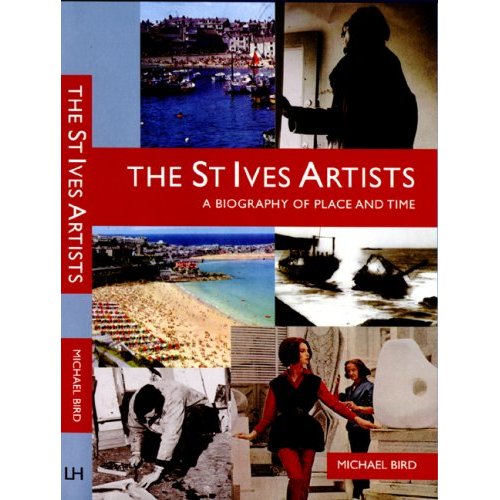 St Ives Artists is written like a story – a novel about artists. From the loving words about the Frosts’ journey down to St Ives by train, to the tale of the influence of France on Ben Nicholson. There are vital pieces of information that are given but not resolved – the fact that the ‘artist’ colony’ had its ups and downs and was by no means a force in the art world from the beginning, despite the history of artists in Cornwall stretching back 80 years or more. The vitality brought to the whole country by the influx of refugees from Europe before WW2. Which brought about the weakening and near extinction of Paris as the centre of the avant garde. The writer deals with Heron’s writing and Garbo’s manifesto, but does not draw the conclusion that there is no art where there is no writing. It is not a fashionable thing to say, but because the artists wrote and writers wrote about the artists, everything that was debated in the pubs of St Ives was read by the art readers of New York. Today, nothing that goes on in St Ives is read by anyone outside of Cornwall which is why it is dead as an art scene.

As this book is about St Ives and not about the artists one would have thought that a vital element of the story.

Also missed, because no one thinks about it, is the free card the world gave the UK after the war. Alistair Cook tells the story of Churchill playing cards with American Secret Service men as he flew to meet the President after VE Day and the men grumbling their boss had told them to lose under the dictum, ‘Lose. The man just saved the free world’. In the late 40s and throughout the 50s everything British was the best. It’s a frisson the Brexit camp want to return to but, like so much, they lose the history of the time in thinking only about its benefits. St Ives was a winner because the UK had won a war, not because the artists were the best in the world. They had struggled in the 30s, developed their styles (Lanyon was still improving in the late 40s). The writers suggests David Bomberg did the most ‘compelling’ land-scapes of Cornwall in the 40s but he didn’t get on socially with Nicholson and Hepworth so never became a part of St Ives. On the other hand, Sven Berlin stayed for a while and made, according to Bird, ‘plodding’ work.

What these artists were, without doubt, was dynamic, efficient networkers. One of the first grants from the Arts Council was given to buy what was to become Porthmeor Studios. Then there was the Penwith.

The writer does not seem aware that the original rules of the Penwith were to force a turn-round of the Trustees at least every four years to stop the place going stale, something that was not adhered to since the 80s. Thus does the dynamic become lethargic. Frost was later to damn the art business in the UK as a ‘haven for nonentities’ (p108). But money was moving to the Unites States and art movements in the 20th century came and went with rapid alacrity. The St Ives School was no exception. The avant garde moved to New York and all St Ives could do was to wait out the lives of its resident artists.

This book is beautiful about St Ives. It doesn’t draw the hard conclusions about the personalities it needs to, to really understand how a Cornish town living mostly from fishing came to have an art movement named after it, though it puts all the points in place.

When dealing with art history you have to understand the world, as well as a particular place, to get to the core of what makes an avant garde movement.

I thought your magazine might like to see what I thought of Mr. Nanavati’s article; I wrote a comment on the book in Amazon UK in the review area because after reading his article I read the book and discovered how beautiful it was. Thanks to the review by Daniel Nanavati that I found in the New Art Examiner, I read Michael Bird’s very interesting book. I liked the book far more than Nanavati did and couldn’t get over the description of Cornwall then and how it is still the same today, fortunately! It was a very readable book, and… Read more »

Not much seems to have changed in train journeys down to St Ives then when the Frosts came to what they are today. It’s an area where time has pleasantly stopped at around 40 years ago, except during the tourist season when things look a bit more modern and 2018ish. It’s a very particular part of the world, and it’s easy to see why so many artists found themselves there.

Ir s quite clear that St Ives had faded as a significant art Center, The domination of the Penwith by “Kathy “being a factor, The inability of the Penwith Society to deal with this is a major hinderance A Historical recognizing is needed. While the coverup is in place nothing will happen. Just riding on the ghosts from the past

Though you may not have read about St Ives in Art Forum since 2008, we still have our St Ives School of Art, a “creative breathing space” attended by artists from around the world, creating a thriving art community. We are in Britian not in America; have you forgotten? Where else in the world can you find such inspiration for painting than in and around St Ives? What other town can boast so many famous artists from its past and with its future all to come?

I was enjoying your review, until you wrote, “Today, nothing that goes on in St Ives is read by anyone outside of Cornwall which is why it is dead as an art scene.” Can you tell me more to support this statement, as I totally disagree. There is also the Tate St Ives; do you not consider this museum? If not, why not? I find it spectacular and a gift to locals and to tourists who flock to St Ives, something beside just the beach and the tourist shops.

I would be happy to read about St Ives in Art In America or Art Forum.

Though St Ives is not London or New York, it does have a very lively art scene and some wonderful similarities to St Paul de Vence in France, though St Ives is more beautiful by far.
Mr Nanavati, why does it matter so much for St Ives to be covered in Art in America or Art Forum? Could you explain please? Do the Belgrave Gallery and the Tate not qualify?