Home » article » Artemisia Gentileschi: the painting of the 17th century

Artemisia Gentileschi: the painting of the 17th century 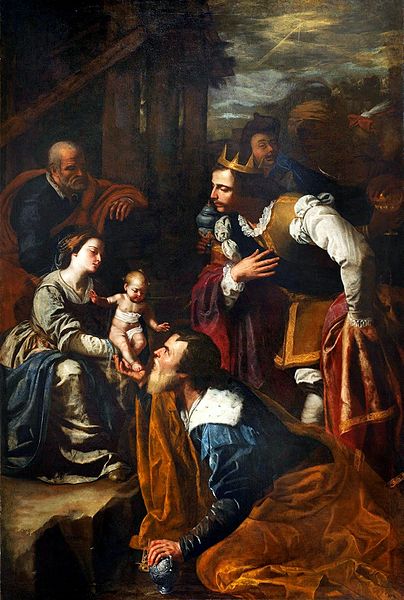 At Christmas the Diocesan Museum of Milan traditionally exhibits a masterpiece, and this year the choice has fallen on The Adoration of the Magi by Artemisia Gentileschi. The painting comes from the Cathedral of Pozzuoli, near Naples.

Born in Rome in 1593, the daughter of the painter Orazio, she became acquainted with the Rome art scene at a young age. She was influenced both by her father’s style and Caravaggio’s works. Resolute and talented, Artemisia succeeded in realising her childhood desire to become a great painter despite many dramatic difficulties in her life. She was the first woman accepted at the Accademia di Arte del Disegno in Florence in 1616, where she was also involved in a terrible rape trial. Once back in Rome in 1620, she became a well-known painter with commissions from princes, cardinals and noblemen.

During her first period in Naples, Artemisia received a first public commission by the Church for the renovation of Pozzuoli Cathedral, spared from the Vesuvius eruption in 1631. The Spanish Bishop, Martin de Leòn Càrdenas, commissioned three oil canvases for a triptych in the new, large choir; one of these was The Adoration of the Magi.

Naples in the 1630s was an important city with flourishing commerce, culture and art, where the heritage of Caravaggio was still present and alive, as was his influence on the local painting style and artists, even if clients preferred more classical styles and moderate effects.

In The Adoration of the Magi Gentileschi combines a calm and devotional atmosphere with measured naturalism through the use of different shades of red, brown, blue and yellow. She focuses on reality, the looks on the faces of the characters, through pictorial representation of light and shadow.

The Virgin, portrayed as a woman of the people, gently presents her Son to the Magi so they can adore Him. Young and beautiful, Mary shows both dignity and sweetness, while the Magi, kings or astronomers or wise-men from the East, express the amazement of the mystery of god in front of the Mystery Of God, who becomes flesh to save all mankind.

Here Artemisia Gentileschi faces a traditional subject very differently from her first dramatic works. Her painting shows some inexperience, for instance in the odd proportions between the Virgin sitting on a rock and the imposing size of the Magi, but the quality of the painting is undisputable.

Artemisia Gentileschi was not the only female painter of her time, but she was the most famous, the most appreciated and sought-after. It was said that “she was the only woman in Italy who has ever known what painting, colours and impasto are”.